This was the first edition of The Unheard Herald, an eNewspaper in pdf format with associated webpage material. The eNewspaper was created and published by Root Routledge from work done by an independed local group of community activists and volunteers, of which he was an active participant. It formed the only other investigative challenge to the narrative and pro-Big Box Store bias that was being presented by Durango's main newspaper The Durango Herald. This first edition, along with supporting activist documents, does a rhetorical analysis of the dozen or so Durango Herald articles on this issue.

This local activist effort was initiated to challenge the claims and goals of the Durango Town Coucil and Town manager and planners, which involved trying to bring in more "Big Box Stores" into the Durango local economy (we already have a Wal-Mart Superstore, a Home Depot, and an Office Depot, as well as The Durango Mall, which has large anchor stores, including JC Penny. We believe their arguments for the purported benefits did not stand up to critical scrutiny, did not adequately analyze life-time cost to our community, and that following this path would destroy the very values our local residents cherrished about our little mountain town community of 17,000 residents, in our relatively small Southwest Colorado La Plata Country with a population of about 56,000.

There are multipe associated documents, reports and communications created by the activists and town officials. Links to these documents are identified in the block below. 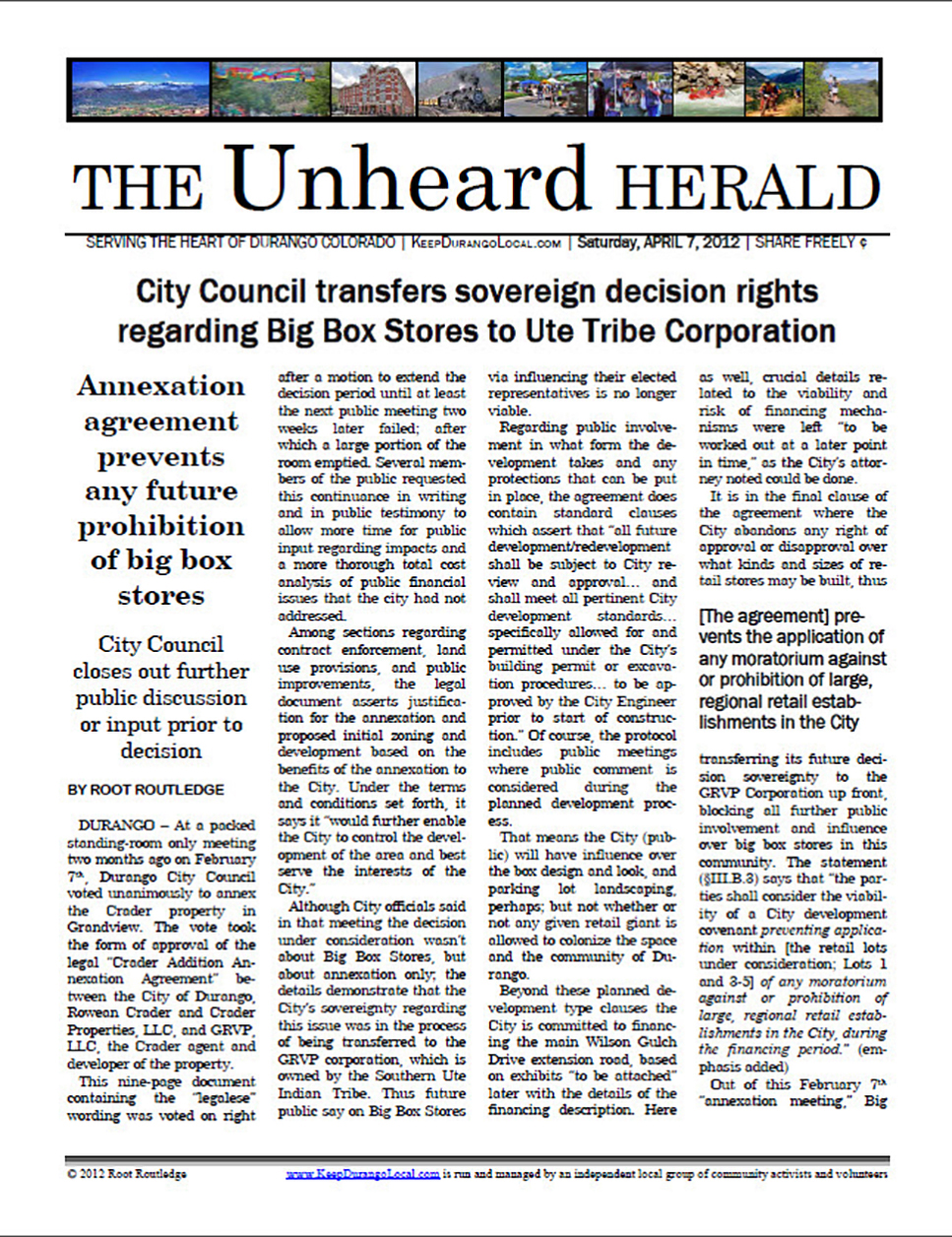 Disaggregation and delinking of decision elements for proper analysis of impacts (currently muddled together; no local economic or community impact analysis has been done beyond the potential demand side estimates of EPS Consulting).
Continuance on all three decision elements (for proper public review, understanding, involvement and examination of impacts).

2012-02-06 Root Routledge: "Keeping Durango's Locally Rooted Economy On Track": This is a 16-page supporting analysis and visioning paper to back up our efforts to stop the invasion of more Big Box Stores in Durango. It has three main sections:

The City of Durango produced an area plan for Grandview in 2004. At the end of the decade they hired a consulting firm, Economic & Planning Systems, Inc (EPS), of Denver to do the analysis of the proposed Crader Property Annexation (part of the Grandview planning area) and the impact of bringing in Big Box Stores to address (try to stop and capture) the claimed leakage of revenue going to the Farmington, New Mexico, shopping centers 60 miles to the south. Several of their analysis and recommendation documents are listed here, along with the City plan and the final ordinance approving the annexation, about which thisarticle was written, launching The Unheard Herald.

2004-01 City of Durango: "Grandview Area Plan: An Element of the Durango Comprehensive Plan"

2012-02-12 City Council of Durango: "Ordinance O-2012-6 Approving Annexation and Initial Zoning of the Crader Addition to the City of Durango"

In the process of taking on the local economy challenge in Durango, we have gathered several related research articles, books, papers and talks related to local living economies and the impact of Big Box Stores. We offer this collection as a starting point for others who may be in the same sort of struggle to save their community from the invasion and colonization of their local economy by absentee owners who look only to Wall Street for their investment guidance.

2005-05 Paula Ding: "Envisioning Local Futures:
The Evolution of Community Visioning
as a Tool for Managing Change", J. FutureStudies, v9, n4
In this article, offering an innovative tool for addressing positive democratic change at the community level, Paula Ding interviews Steven Ames, a leading expert and prolific writer on visioning. Steven Ames is a consulting long-range planner and futurist, author of A Guide to Community Visioning (American Planning Association: 1993, 1998) and developer of the Oregon Model of Community Visioning. She writes in the introduction: "Citizens' right to participate in decision-making and the planning of their future is a key tenet of western democratic thought. Community visioning is one process for community engagement that has been used to affirm the principles of democracy and address issues facing society today."

2009-10-17 Stacy Mitchell: "A New Deal for Local Economies", Bristol Schumacher Conference
The conference was chaired by the New Economics Foundation and organized around the theme,
"FROM THE ASHES OF THE CRASH: Rebuilding the new economics."

2011-04-11 StacyMitchell: "Local Index", Nation Magazine, Special-REV3
This is a one-page "Monopoly Board" style "Localism Index". It lays out on the board various statistics realted to small and big businesses. She concludes: "Perhaps we're not doomed to an economy controlled by a few giant corporations after all. A growing number of signs
suggest that local, independent businesses might just be making a comeback."

2011-05-16 PaulCienfuegos: "We the People", Talk given in Eugene, Oregon, Alternative Radio, CIEP002
Paul Cienfuegos lectures and leads workshops on dismantling corporate rule. He co-founded Democracy Unlimited of Humboldt County in Northern California. He's based in Portland, Oregon where he's working to build a community rights
movement.

Stacy Mitchell is a senior researcher with the New Rules Project at the Institute for Local Self-Reliance (newrules.org) and is the author of Big Box Swindle:
The True Cost of Mega-Retailers and the Fight for America's Independent Businesses. Below are several live radio or YouTube interviews and talks by Stacy Mitchell: